I’d like to welcome Jo Anderton to my blog today! Jo’s debut novel, DEBRIS, just came out and she’s here to tell us about its fascinating Russian-inspired setting–the city of Movoc-Under-Keeper.

The Varsnian north-west regional veche are pleased to present:

Situated at the foot of the majestic Keeper Mountain, rich in Varsnian history and culture, the city of Movoc-under-Keeper has plenty to offer any traveller.

Movoc-under-Keeper was established on the banks of the Keeper’s Tear River in the dark recesses of antiquity, and has played a vital role in Varsnian history ever since. The benevolent ancient Varsnian deity known as the Keeper was believed to reside within the mountain that now bears his name, and as a result Movoc has been a place of power from kings, to ruling families, to veche. As a major centre for commerce and learning, the city played an important role in the pion-binding revolution that, two hundred years ago, ushered in our advanced and enlightened modern era.

Don’t forget to pack warm clothes! While Movoc-under-Keeper is renowned for its history and beauty, it is just as well known for its snowstorms or freezing clear days. Even if you are travelling in the warmer moons during Newbud and Widesky, remember the wind that rushes down the Keeper’s Tear River has icy fingers any time of the year!

The Movoc-under-Keeper of today is a pion-binding marvel. The entire city is draped in massive systems of complicated bindings, which not only keep it running, but are also breathtaking in their bright and colourful beauty. Streamers of shining pions deliver everything from heat to water to light from the large factories established throughout the outskirts to every single building in the city.

And never fear, thanks to the national veche’s world-class collecting systems, the buildup of debris is never a problem in Movoc-under-Keeper.

Getting around Movoc-under-Keeper couldn’t be easier, and there is an option to suit any budget. From elegant landaus that glide by on legs of light, old fashioned coaches on wheels, to the ferries that run on the Keeper’s Tear River.

Thanks to pion-binding innovations, a wide range of food is available in Movoc-under-Keeper all year round — despite the climate! Most food is grown in the enormous greenhouses established outside the city walls, and can be purchased from vendors in one of the many market squares. Local specialties include hot sweet potato with crunchy skin, cooked for you on the spot and perfect for a cold day. Don’t miss your chance to try kasha — a traditional buckwheat porridge most often flavoured with raisins, cinnamon and honey. Try it with stewed fruit and brandy.

The people of Movoc-under-Keeper are also intensely proud of the quality of their coffee. Stop at one of the many coffee houses, and you’ll find out why!

Thanks, Jo! If you’re ready to spend some time in Movoc-Under-Keeper, Jo has graciously agreed to give away a signed copy of DEBRIS to a random commenter on this post. Just tell us about a favorite or odd tourist destination in your hometown–or your character’s hometown–or just throw your name into the hat. Contest will close Sunday, October 30th at 10pm EST. 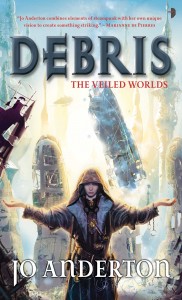 In a far future where technology is all but indistinguishable from magic, Tanyana is one of the elite.

She can control pions, the building blocks of matter, shaping them into new forms using ritual gestures and techniques. The rewards are great, and she is one of most highly regarded people in the city. But that was before the “accident”.

Stripped of her powers, bound inside a bizarre powersuit, she finds herself cast down to the very lowest level of society. Powerless, penniless and scarred, Tanyana must adjust to a new life collecting “debris”, the stuff left behind by pions. But as she tries to find who has done all of this to her, she also starts to realize that debris is more important than anyone could guess.

A sinister and shadowy organization. The young mages who oppose it. The hunt for ancient relics has begun. Cloud Village Arc: Lisette never thought she would return to the mountains she fled as a child. But when Tamsin, a Heartwood alumna, invites Amber, Naia, and her on a job in the area, Lisette figures it’s END_OF_DOCUMENT_TOKEN_TO_BE_REPLACED