As many of you know, I have recently self-published a collection of short fiction on Amazon and Barnes & Noble.

Self-publishing is a bit of a misnomer for what I did. Sure, I wrote the stories and wrestled them into various formats and pushed The Button, but it wouldn’t have happened without the help of several people. I provided the raw material (the stories), and they helped polish that into the product (ebook) that you are now holding in your hands (provided that you have your Kindle or Nook or other e-reader with you RIGHT NOW, because you are, of course, surgically attached to it–and if you aren’t, WHY NOT?).

If you liked my book, these are the people you can also thank. If you hated the book–well, just think how BAD it would’ve been without them. *pause* Yeah, that bad.

So without further ado (goodness, I write long intros. Note to self: brevity is the soul of wit), here are the fine folks who helped turn this ebook into reality:

First off, is writing buddy and best beta reader EVER, Jo Anderton. Jo is the first line of defense between my first drafts and the rest of the hapless world. She’s the one who gently, yet firmly, tells me things like, “Tighten that beginning! You waste too much time on the intro!” (hmm, sounds like a familiar problem…) and “Well. That ending came out of nowhere” and “Wowza. I have NO idea what just happened here”  (okay, maybe she doesn’t say “Wowza”, but something similar in Australian).

You can thank Jo later.

When time came to put the three fairy tales into ebook format, I didn’t want to burden Jo with copyedits (besides, there’s a lot of content coming down the pipeline I need want her to beta ;)). Plus, I wanted fresh eyes on the stories. Enter Liana Mir. Not only did she give my stories the eagle eye, she also turned them back around to me really fast.

I’m still traumatized by my one experience with Photoshop back in college. I did try, though. I downloaded GIMP, but it made me turn pale with horror. I looked into cover designer rates and had to call for the smelling salts.

So I asked my sister-in-law, Robin Cornett (an awesome photographer and web designer–see her credit at the bottom of the page) if she’d be willing to try her hand at an ebook cover. Robin’s a sport, so she said, “Sure!” It was a great experience for me because all I had to do was look at pretty pictures and cool fonts and say “yes” or “no” or “maybe” and she handled the rest. I knew that brokenness and mirrors/glass were big in my stories, but I couldn’t think beyond a boring image of a broken mirror. Robin was the one who came up with the idea of adding a layer of broken glass over a girl’s image. We considered a close-up face shot, but it said “contemporary YA” rather than “fractured fairy tales”. Luckily, we were able to find a shot of a girl in a wedding dress and a tiara which said “fairy tale princess” to me and went from there.

I think she did a lovely job. Don’t you? 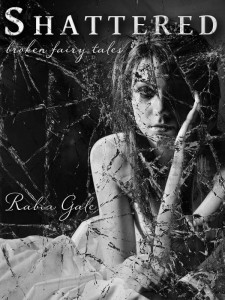 Robin also came up with the title and subtitle. If it hadn’t been for her, you might be reading a book called Frosted Fairy Tales or Cold Hands, Cracked Mirror. Catchy–not!

Last but not least is my husband David, who urged me to go the self-publishing route with these stories. He saw that the query-go-round was taking its toll on my productivity and spirit, that I was really attracted to the idea of project-managing the publication of my own e-book, and he encouraged me to go for it. He’s also a programmer, so whenever I got into trouble during the conversion process he went into the XHTML and cleaned things up for me.

And, while I’m giving credit: he also wrote my blurb. He did a better job if it than I did. Thanks, hon!

There you have it. Yes, I self-published, but it was a team effort.

Want a chance to win a copy of SHATTERED? Check this post for giveaway details!