You’re in for a treat today! Jo Anderton is here to talk about how she dealt with the sagging middle problem while writing Suited, book 2 of her Veiled Worlds trilogy. She’s also giving away a signed copy of Suited. Leave a comment to enter the drawing. Contest open till Monday, July 9th, 8pm EST.

The fact that Suited was a book two was very much a part of my thinking while I was writing it.

The idea of writing a book two terrified me. Book twos have all this extra pressure on them. There’s the fear of ‘middle book syndrome’, where the book feels like little more than filler between the real action of the beginning and the end. There’s living up to any expectations I might have set up in the first book — from the readers who enjoyed it and want to see more, to the readers who have decided to reserve judgement. From a world building and story telling perspective, I knew this book had an important role to fill — there were big events that needed to happen, a couple of twist, some revelations. What if I couldn’t do them justice? All of this weighed upon me. If I wasn’t careful I could end up with something boring, pointless, that made no one happy, not even me.

In order to stop the hyperventilating panic OMG I can’t do this, I did what I always do — I made a list. This wasn’t a list on paper or whiteboard, colour-coded and bullet-pointed, not like my usual lists. (Yes, I do this. Don’t judge me!) This list existed in my head and in my gut, and it was at once simple, and complicated. It went like this:

You might have noticed that a lot of the fears I listed above involve stagnation, and I guess they can be summed up that way rather neatly — I was afraid the book would stagnate. Beginnings are exciting because they are fresh. New worlds to explore, new characters to meet, new challenges to overcome and bad guys to fight. By the time we get to the sequel, we already know these things. We know who the main characters are, we know how the world works, we know the major threats and who’s doing the threatening. So ‘don’t get comfortable’ was my way of injecting some of that excitement back.

Tanyana’s settled into her debris collecting team — let’s take that away from her, shall we? She’s starting to get a handle on her new life — let’s add a massive complication! Maybe the world doesn’t work the way you think it does, and maybe the Puppet Men are even weirder than they seem. And how about we put some major characters in some very real danger, and see who comes out the other end?

‘Don’t get comfortable’ applies to Tanyana and everyone else in her world, but it also applied to me. Any time I started to catch my breath as a writer, any time I caught myself thinking ‘oh well, this is nice’ I knew it was time to shake it up. Keep moving. Something doesn’t feel right, delete and try again. Good enough isn’t good enough. You think that scene’s finished? Think again. Let’s keep the waters flowing. No stagnation here.

Suited was my first book two, with all the pressures that brings with it, and this was how I handled it. With my simple, complicated list.

And, if all else fails, blow everything up. 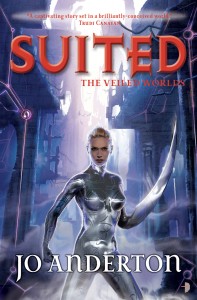 Tanyana has chosen to help the Keeper, to stand against the Puppet Men, who continue to force the Debris into unnatural creations.

And when even her own suit becomes aggressive against her, Tanyana must weigh some very personal issues against her determination to serve the greater good.

About Jo: Jo Anderton lives in Sydney with her husband and too many pets. By day she is a mild-mannered marketing coordinator for an Australian book distributor. By night, weekends and lunchtimes she writes science fiction, fantasy and horror. Her short fiction has most recently appeared in Light Touch Paper, Stand Clear and Epilogue. Her debut novel, Debris (Book One the Veiled Worlds Series) was published by Angry Robot Books in 2011. Book two Suited has just been released. Debris was a finalist for the 2011 Aurealis award for Best Fantasy Novel, and Jo won the 2012 Ditmar for Best New Talent. Visit her online at http://joanneanderton.com and on Twitter @joanneanderton

A bunch of magical misfits. Their place to belong. Out of work and trapped in a dead-end coastal town. This is not what Amber had in mind when she left her island home to explore a continent drenched in magic and once inhabited by dragons. She’s this close to working at Stunning Spells, a magical sweatshop that churns END_OF_DOCUMENT_TOKEN_TO_BE_REPLACED