A few weeks ago, I drew back the curtains on my latest work-in-progress (and next self-published ebook).

Rainbird is a science fantasy novella that grew out of a short story I wrote last year. My protagonist, Rainbird, is both strong and vulnerable, generous and impulsive, determinedly cheerful in trying circumstances but, like everyone else, has her blind spots. The setting is the sunway, a gigantic track made from the bone of an immense dragon upon which this world’s artificial sun moves. Betrayal and love, atonement and duty are some of the themes of the story.

I have a cover for this book. I’ve had it beta-read, and two more people have said “yes” to reading it for one last spit-and-polish. I’m less than ten pages away from finishing version 4 of the story.

And I’m afraid to release it.

I didn’t recognize the fear, at first. I was going great guns on my latest pass through Rainbird when I just–stopped. And I haven’t touched it for almost a week.

But those reasons merely disguised the real one: fear.

As for Rainbird? I love this story. Some–not all–of my beta readers love this story. I know that I’ve done my best with it, and there is no way to make it better without tearing out its heart and turning it into something altogether different.

It’s time to kick the twin demons of Fear and Perfectionism to the curb. It’s time to get on with my copyedit so Rainbird can go seek its audience. It’s time to stop clinging and let go.

So, what’s going on with Rainbird?

It’s coming out this fall. Soon. Watch this space for the release date. 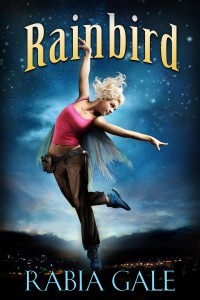 She’s a half-breed in hiding.

Rainbird never belonged. To one race, she’s chattel. To the other, she’s an abomination that should never have existed.

She lives on the sunway.

High above the ground, Rainbird is safe, as long as she does her job, keeps her head down, and never ever draws attention to herself.

But one act of sabotage is about to change everything.

For Rainbird. And for her world.

A sinister and shadowy organization. The young mages who oppose it. The hunt for ancient relics has begun. Cloud Village Arc: Lisette never thought she would return to the mountains she fled as a child. But when Tamsin, a Heartwood alumna, invites Amber, Naia, and her on a job in the area, Lisette figures it’s END_OF_DOCUMENT_TOKEN_TO_BE_REPLACED