Welcome to the LAST post in the Back to School for Writers blog series. Today’s guest is Jodi Lea Stewart, telling us why she’s proud of the Navajo Code Talkers. Read on for a fascinating glimpse into history.

Mix all ingredients, then add:

Turn mixture out into well-seasoned platoons and…

The above “recipe” produced the world’s first and only indecipherable code and a group of heroes who were the military’s best-kept secret until 2001.

Major Howard Conner, fifth Marine Division signal officer said that were it not for the Navajo Code Talkers, the Marines would never have taken Iwo Jima. According to the Navajo Code Talkers World War II Fact Sheet, six Navajos were in Iwo Jima working around the clock non-stop for the first two days of the battle. They sent and received over 800 messages, ALL WITHOUT  ERROR!

Where did these outstanding Code Talker candidates come from?

The Rez! Government-run boarding schools were set up in the 1890s to assimilate Native Americans into American culture. The children were  stolen participated by leaving their families at the age of five or six years old. They didn’t return until after graduation. The schools were run with rock-hard rules similar to an adult military boot camp.

From these prisons schools, came the Navajo Code Talkers, the only men in all of history to create a code so magnificently ironclad that the best code crackers in the world couldn’t touch it. It makes me want to scream, it’s so cool!!

The recruits had to meet age, weight, health and language requirements, and went through the standard Marine boot-camp training. It is said that drill instructors and other recruits were in awe of the physical endurance of the Navajo men. After boot camp, the initial group of Navajo Code Talkers were charged with creating 211 military terms. The codes were memorized and never written down. Before it was over, the secret code words numbered more than 700, thus marking the end of constant interception and sabotage of US. military communications from our enemies.

Exactly how the code was conceived and implemented is nothing short of breathtaking.

Are you getting it why I’m so proud of the Navajos?

The code itself was declassified in 1968, but the Code Talkers were still under wraps until 2001. Some of the Code Talker’s own families had no concept of how their relative had served in the wars in which they participated.

In 2001, the Navajo Code Talkers were honored and recognized by this country as heroes. President George Bush awarded Congressional Gold Medals to the original twenty-nine code talkers. Of the original twenty-nine, only five were alive, and four were able to travel to Washington D.C. to receive their medal. Later, in Window Rock, Arizona – the capitol of the Navajo Nation – silver medals were bestowed upon the other men who later qualified as Navajo Code Talkers. Because recognition was so slow to come, most of the medals were handed off to survivors.

On a smaller but not lesser scale, members of the Sioux, Choctaw, Comanche and Mohawk tribes also used their native languages as a code during World War II for the Army. (If I left any tribes out, I apologize. Contact me, and I’ll be more than happy to add them to this list.)

It is stunning and sad to realize that the Native American men (and women) who sacrificed everything to serve their country in World War II, the Korean War and the Vietnam War were not allowed to vote in US elections until:

On the Official Website of the Navajo Code Talkers, it says: They were a small band of warriors who created an unbreakable code from the ancient language of their people and changed the course of modern history.

That gives me goose bumps. I’ve studied the Navajo people enough to know that the sacrifice those young men made to the war effort is incalculable, and that it goes far beyond serving a stint in the US military.

Diné – what the Navajos call themselves. It means the people.

Diné Bizaad – the native language of the Navajo.

Hitler was: He Who Smells His Mustache.

In case you want to read about the Code Talkers on Wikipedia in their own words and language, please be my guest, and good luck!

What about you? Did you already know about the Navajo Code Talkers, or is this something you’ve never heard of? If you are familiar with the real Code Talkers and their contribution to US history, do you think the movie Wind Walkers with Nicholas Cage exemplified them properly? I lean toward no. What do you think about that? We’d all love to hear! 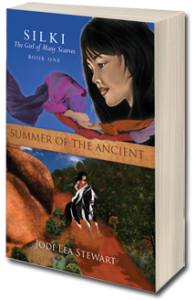 Jodi Lea Stewart was born in Texas and grew up in Apache County on a cattle ranch near Concho, Arizona. She left the University of Arizona in Tucson to move to San Francisco, where she learned about peace, love, and exactly what she didn’t want to do with her life. Since then, Jodi graduated summa cum laude with a BS in Business Management from Letourneau University, raised two children, worked as an electro-mechanical drafter, penned humor columns for a college periodical, wrote regional western articles and served as managing editor of a Fortune 500 company newsletter. She currently lives in Texas and Arizona with her husband, two Standard poodles, two rescue cats and numerous gigantic, bossy houseplants. Silki, the Girl of Many Scarves: SUMMER OF THE ANCIENT is her first novel. Her next book in the series, CANYON OF DOOM, will be out in early 2013.

Visit her online at http://jodileastewartblog.com/.

A bunch of magical misfits. Their place to belong. Out of work and trapped in a dead-end coastal town. This is not what Amber had in mind when she left her island home to explore a continent drenched in magic and once inhabited by dragons. She’s this close to working at Stunning Spells, a magical sweatshop that churns END_OF_DOCUMENT_TOKEN_TO_BE_REPLACED