Please give a big welcome to fellow WANA blogger Siri Paulson, who’s joining us here today to talk about some of her favorite historical fiction books from her childhood.

Thanks for having me, Rabia!

I’m here to talk about books, which thrills me to no end because I’m a book lover from way back. Growing up, I read all sorts of things, but one of my favorite genres was historical fiction. Other times and places held an endless fascination for me. It didn’t really matter when or where a book was set, as long as the setting was as unlike my Canadian suburban existence as possible.

But, of course, I had favorite periods. Here are a few of them, along with the books that inspired me most…

The Middle Ages and the Renaissance

Another of my preferred genres was fantasy, so anything with castles was automatically a hit. Wandering bards, artists’ guilds, and apprentices? Yes please!

At some point I developed a strange fascination with the experiences of Jewish children during the war. I read The Diary of Anne Frank, of course, but also…

Honorable mentions: ancient Egypt and Israel, pioneer-era North America, and nineteenth-century Britain. I also have to mention Lucy Fitch Perkins, who wrote a long series of books about twins in various countries and time periods – The Cave Twins, The Spartan Twins, The Puritan Twins, The Dutch Twins, and so on – though I wouldn’t be surprised if they read as very dated now.

Over to you! Which times and places are (or were) your favorite to read about? Any favorite historical novels or authors to share? Let us know in the comments! 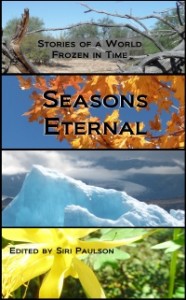 Siri Paulson is a science fiction and fantasy writer and an editor of both fiction (at Turtleduck Press) and non-fiction. She recently moved into a big old house in Toronto and is still wondering what she got herself into. In her spare time (when she has any) she dances, knits, and dissects movies.

Her short fiction can be found most recently in the anthology Seasons Eternal: Stories of a World Frozen in Time. You can read more about it at Turtleduck Press. Seasons Eternal is available in print, Kindle, or your ebook format of choice.

A bunch of magical misfits. Their place to belong. Out of work and trapped in a dead-end coastal town. This is not what Amber had in mind when she left her island home to explore a continent drenched in magic and once inhabited by dragons. She’s this close to working at Stunning Spells, a magical sweatshop that churns END_OF_DOCUMENT_TOKEN_TO_BE_REPLACED