Several weeks ago, our family listened to Harry Potter and the Sorcerer’s Stone on a long (long!) car trip. We followed that up with a viewing of the movie adaptation. For several days thereafter, the children’s play was full of Quidditch matches and House Sortings: “Hogwarts, without Harry Potter”, as my six-year-old put it. 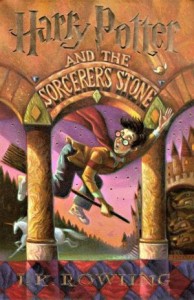 And it occurred to me then that my kids will never know a world without Harry Potter, without his complete story. They will never know the building buzz, the anticipation of the next release, or the speculation over how it would all end.

And even more than that, they will never have the experiences that shaped–long before Harry came on the scene–the way I view the series.

I first saw Harry Potter in my college bookstore, and was instantly attracted by its cover and blurb. It drew me in not because it was something new and different, but because it sounded so comfortably like other British children’s books.

Otherwise known as the Books I Grew Up Reading.

The too-horrible-to-be-believable Dursleys reminded me of Matilda’s terrible family in the book by Road Dahl. The whimsy that characterizes so much of the wizarding world is reminiscent of Diana Wynne Jones’ charming and delightful books. And the whole boarding school aspect–stripped off its magic and co-education–is a lot like Enid Blyton’s Malory Towers and St. Clare’s school series

Blyton’s boarding schools, like Hogwarts, include the stereotypical Good but Stern Teacher, the Nasty Teacher, and the Timid Lacking-Classroom-Management-Skills Teacher. The headmistress is a an awe-inspiring, remote figure, who appears to dispense wisdom at the end of the book, rather like Dumbledore. Blyton’s boarding school girls tread the halls at midnight to have illicit feasts, while Harry’s  illicit midnight trips are to the Restricted Section of the library. A chapter or two of a Blyton school story is nearly always devoted to lacrosse matches in the same way Rowling spends time describing Quidditch games.

But Hogwarts also shares elements with my own school experience, sadly, though, without the magic.

I didn’t go to a British boarding school, but I did go to one that had been founded by the British for the education of their young in colonial Karachi.

We didn’t have houses with names like Gryffindor, Ravenclaw, Hufflepuff, and Slytherin, but we did have houses called Frere, Napier, and Streeton (all men who extended and strengthened the British Empire’s hold on India–make of that what you will). And yes, we did earn points for academic and athletic achievement, and a House Cup was awarded at the end of the year.

We didn’t have a singing Sorting Hat, but we did have a school song. (It began with “O God whose mercy long has kept/Our school from age to age”). I still know the first two verses and the chorus–some things you never forget. Lyrics available upon request. 😉

We wore uniforms and had prefects. In fact, I was a prefect my last year of school, and I wore a badge and a black gown. Our main job was to keep students in orderly lines, check for uniform violations, and make sure there was no unseemly giggling/talking during Assembly.

Fast forward fourteen years, and here are my young, homeschooled children, who have no experience with this kind of school system. Who can’t help knowing major plot points of Harry Potter because they live in a world with Harry Potter (just as my 8yo who has only watched A New Hope knows the relationship between Anakin Skywalker and Darth Vader). Who will read Diana Wynne Jones and Roald Dahl and Enid Blyton after their exposure to Harry Potter, not before.

My kids, who will bring their own, very different experiences to the story of the Boy Who Lived.