Tia Nevitt is the author of Accidental Enchantments, a series of novella-length fairy tale retellings. Her latest release, the Snow White-inspired The Magic Mirror and the Seventh Dwarf, features an unusual protagonist in one of the seven dwarves–a young woman looking for her own happy ending. Today, Tia is here to share her biggest novella-writing tip.

Novellas are hot in eBooks right now. Now that bookbinding is no longer an issue, it is no longer cost-prohibitive to produce novellas outside of a serial publication. ePublishers love them.

A novella is considered a story that is between 15,000 and 50,000 words. Here’s a rough guideline on manuscript length classifications:

Shorter works are often harder to write than longer works. Plenty of authors love writing novels but wince at the thought of writing short stories. They might say something like, “I meant to write a short story but it kept wanting to turn into a novel.”

Here is my number one tip on writing novella-length works.

Limit the Number of Characters

When I was writing The Sevenfold Spell, I learned that each new secondary character brought with it at least a thousand words. At the time, I was expanding it from short story to novella, so I cut a bunch of really minor characters and added two major secondary characters–Talia’s best friend (Widow Harla) and the third man in her life (Prince Andrew). Each came with a story and a purpose. The Sevenfold Spell is a tight little story, and so it ended up with a very small cast of characters.

With The Magic Mirror and the Seventh Dwarf, I faced a new problem. I wanted to write a novella from the start, but I knew right away I would have to have seven dwarfs. Hmm. Seven dwarfs plus the prince, the princess and the evil queen. And I had better not make any of those dwarfs stereotypical. No one like Sneezy or Grumpy in any way.

So I ended up with ten characters, but an eleventh one wrestled his way in—the minstrel.

My characters ended up fitting the following classifications:

Protagonists – Gretchen and Prince Richard. I knew I would have parallel love stories, so I made one person from each love story the principal POV. Otherwise, I felt the story would be overwhelmed in POV changes.

Love interests – Lars and Princess Angelika – They have fewer POV scenes, but each plays a principal part.

Principal Secondary – Marta,  Johann and Rudolph – Marta is Gretchen’s mentor and matron of the dwarf farm. Johann is the minstrel and has key interactions with both Gretchen and Richard. Rudolph is a minor villain, a bully who inadvertently helps bring Gretchen and Lars together.

Minor Secondary – Gunther, Klaus, and Dieter – Gunther is the supervisor of the farm; Klaus is the youngest of the dwarfs and is often bullied by Rudolph, and Dieter is the confrontation-adverse owner of the dwarf farm.

How much of the story did each take up? Here’s a pie chart.

The Magic Mirror and the Seventh Dwarf 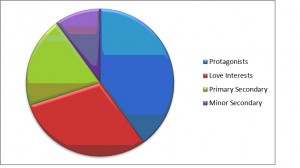 Of course, there’s a lot of overlap. All of the green and purple slices include at least one protagonist or love interest.

Since this was just a guess, I tested it. So considering that the story is about 44,000 words, I generated approximate totals for each group. It looks about right, with the possible exception of the Minor Secondary characters having a smaller portion of the pie.

Another tip I might have is to limit the number of plot twists, but I think if you concentrate on limiting the number characters, that will help more than anything else. This will give you the room that you need to develop the characters and grow it into a fulfilling story without making your readers feel short-changed.

Not even a stint in the military as an aircraft mechanic could erase Tia Nevitt’s love of fairy tales. To this day, she loves to read (and write) books that take her to another place, or another time, or both. She also dabbles in calligraphy, violin, piano and songwriting. Tia has worked on an assembly line, as a computer programmer, a technical writer and a business analyst. She lives in the southeast with her husband and daughter.

Check out The Magic Mirror and the Seventh Dwarf at the following retailers: 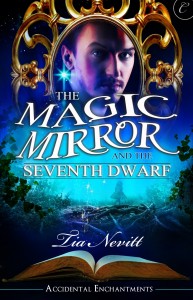 Prince Richard is cursed. He is enslaved to the magic mirror, and must truthfully answer the evil Queen when she uses the mirror to call on  him. To keep from betraying innocents, Richard wanders the countryside and avoids people.

Gretchen has been teased all her life for being small. When she hears a tale of a hidden farm full of little people like her, she sets out to find it – and is welcomed by the mostly male inhabitants. One in particular, Lars, woos her with his gentle kindness and quiet strength.

But danger looms when Gretchen meets a runaway Princess and offers her shelter at the Little Farm. Wandering nearby, Richard instantly falls in love with the young beauty, and is compelled to tell the queen that she is NOT the fairest of  them all. Enraged, the queen vows to find the Farm and destroy it.

If either Gretchen or Richard are to have any hope of a happy ending, they must team up to break the mirror’s spell before the Queen kills them all…

A bunch of magical misfits. Their place to belong. Out of work and trapped in a dead-end coastal town. This is not what Amber had in mind when she left her island home to explore a continent drenched in magic and once inhabited by dragons. She’s this close to working at Stunning Spells, a magical sweatshop that churns END_OF_DOCUMENT_TOKEN_TO_BE_REPLACED