WITCHBLAZE, the third book of The Reflected City series, is finally out! This has been my main writing project since summer 2019. Even when I was resting it or busy with life, it claimed a large chunk of my backbrain. In these Afterthoughts, I’m going to ramble about the process of writing this book–with plenty of spoilers–and I invite you to read along, if behind-the-scenes stuff is your thing. If not, no worries! Not everyone wants to see the stage machinery behind the special effects.

I knew very early in the process of developing this series that the third book would include witches and explore Arabella’s past. Back then, the working title of Book 3 was WITCHES AND WARDS. That had to change when Book 1 became GHOSTLIGHT, and I came up with WITCHBLAZE to fit the naming convention. I very much prefer the current title.

I had already written a small chunk of WITCHBLAZE by the time GHOULFIRE released. When I returned to it as my main project, however, I realized that I was missing a lot of plot and I couldn’t proceed without ironing it out beforehand. Specifically, I needed to figure out details of the witches’ rituals. So I researched, reading through books of medieval magic and herblore, looking up lunar phases and articles on Hecate. I try not to beat my readers over the head with all the research I did, but a lot of the choices I made about timeline, sacrifices, locations, elements, and herbs are based on what I read. I won’t bore you with all the details, but here’s an example: The South-East-North-West counter-clockwise movement of the rites in the book was because I’d read that going widdershins was for spells of loosening and unbinding. It fit what I wanted to do with the dark force, so I implemented it.

But while I had fun figuring out those logistical details, I was more concerned about the emotional core of the story. I knew that Witchblaze was going to be Arabella’s book in a way that the other two were not. I knew that a lot of dark stuff about her past was going to come out–some of it was a lot darker than I had even planned. When I think about Arabella, the word resilient comes to mind. She has to be, in order to come out of all those years in Umbrax as mentally and morally sound as she is. She’s the type to put the past behind her and face forward with resolution and zest. I admire her for that. But she hadn’t really finished processing the past and dealing with it. She pushed it down and pretended to her new friends in Lumen that her history was all sunshine and roses. So, of course, I had to make it all blow up in her face.

At the heart of it, I wanted Arabella to take a good hard look at herself and her choices, and decide what her identity was. Was she always going to be a witch’s brat–or something else?

Then there’s Trey. Thinking over the last two books, I feel like he’s been more honest with himself about the wounds in his past. But, he’s not coping with it in healthy way, either. Burnout was on my mind a lot when I was writing Trey, in the way he buried himself in work and hid his injury and needed people around him (like the longsuffering Nat) to force him to rest. Another thing he needed to realize was that he’d allowed others to take on all the burden of maintaining a relationship with him, and how that was untenable. One of the most emotional moments for me while writing the book was when Trey woke up in the wee hours of the morning, in pain after a nightmare, and realized how lonely he was. He needed that moment, that catalyst. It opened him up to begin mending his relationship with his father, something that I have long wanted him to do.

The development of Trey and Arabella’s relationship was also a huge concern of mine. In the previous books, I’d established they were attracted to each other, and liked and admired one another. But they needed a push to get to a deeper level of intimacy, ie: talking about painful things they would rather have left unsaid. I’m not a fan of plot devices that hinge on people not telling each other things, but I hope I made the emotions behind those decisions clear in this book.

I loved the cozy domestic scene between them at the beginning of the story, especially because I knew it wouldn’t last long (sorry, folks, but I had to do it). They were going along, liking each other, but basically letting outside parties and prior expectations dictate their romantic interests. That needed to stop. A lot of the events around matchmaking aunts and prospective spouses were meant to force both of them to face the question of, “What do I really want out of love and marriage?”

I hadn’t intended to send Arabella back into the Shadow Lands. It was just one of those things that showed up in my head as I was writing my way through that publicly embarrassing scene at Lady Kirkland’s ball. But it worked out really well for rebuilding the bridges between Trey and Arabella. The episode in the Shadow Lands took them away from the urgencies of their lives and the constraints of society long enough for an honest talk. (Plus, I enjoy writing scenes in the Shadow Lands. If you’ve read my other books, you know I enjoy weird settings.) I must’ve spent a week on the conversation Arabella and Trey had up in the conch-shaped vessel. I was that anxious to get it right because it was such a turning point in their relationship–and because she trusted him with her past, he was able to start trusting her with his later on, too.

I’ve said elsewhere that this is the longest book I’ve ever written. It would’ve been even longer had I stuck to all of my original ideas! Originally, the witches were to have completed all the sacrifices at the cardinal points and then finished off with a massive ritual in the center of Lumen. Then I got to about 50K words in the book, looked at where I was in the outline, and decided that I had to cut out the last step. By placing the western ritual in Shrine Park and tying it to Arabella/Arcana, I think I managed to make it work thematically rather well. Trey and Arabella met outside of Shrine Park for the first time in Ghostlight; I liked being able to circle back around to that setting. It makes it feel all neat and wrapped up. There was also some stuff around Rutherford that didn’t make it into the book. I hope that it will show up in the next in some form or another.

As always, secondary characters new and old entered the stage. I always try to make them seem as 3D as possible, without letting them steal the show. For example, I didn’t want either Mr. Rowley or Miss Marston to just be Obstacles to Love. I grew very fond of Miss Marston, and I very much didn’t want to let Arabella off the hook for leading Mr. Rowley on. The awkwardness of turning him down and his deep disappointment was something she had to face. He really did like her lot.

Speaking of secondary characters: the ending. I got to the point where Beatrice died and had a moment of panic when I realized that her death was going to have to overshadow everything from then on out. I had to honor Arabella’s very real grief and let it shade her interactions with Clara, her aunt, even Trey. The previous books ended on a more upbeat note, but I just couldn’t justify that with this one. Seeing her so sad also pushed Trey to break the rules. He let his desire and desperation to fix things overrule his good sense when he goes to see Astrofael. While reading the books of medieval magic, I was struck by the issue of ethics surrounding the practice of it. Talking to demons–especially by oneself–is a big no-no. There are too many ways they can lie and twist you up into pretzels. The link isn’t explicitly said out in Witchblaze (more on this in the next book), but his excursion to the Pit directly links to the book DAEMON slipping its tether.

Which brings me to that cliffhanger, which was one of those awful, wonderful Grinch-y idea one gets. It wasn’t in my plan for DAEMON to swallow up Trey, but honestly, that book wasn’t in my plan at all until it just showed up in Ghostlight while Arabella was exploring Trey’s library. Since my subconscious brought the book up in the first place, I gave it the responsibility of figuring out to do with it. And so DAEMON has Trey, which is terrible for everyone, because they’re about to find out just how much the rely on having a Border Walker around.

What’s next for The Reflected City series? As I write this in January 2021, I have yet to begin Soulbright, the fourth and final book. What I am doing is touching base with the story every couple of days by journaling about it. I’m waiting for the first chunk of the story to coalesce enough for me to begin writing. Right now, everything is just flashes and splinters of scenes with nothing connecting them.

Do you have any comments or questions about the writing of Witchblaze? Tell me below!

Hello, blog! *blows dust off* It’s been a while!

I’m popping in to let you know that I’ve been serializing a YA anime-inspired fantasy on this very site for the past six-to-eight months!

Amber’s out of work and down on her luck, far from home and trapped in a dead-end town. She’s this close to working at Stunning Spells, a magical sweatshop that churns out generic spells.

But then she runs into a group of the strongest mages she’s ever seen. Accidentally caught up in their mission, Amber’s given the chance of a lifetime–and a place to finally belong.

THE HEARTWOOD CHRONICLES updates every other Thursday. Check out the first episode here.

Dark deeds. Creatures of the deep night. Danger and monsters and more. These are tales that make you shiver, look over your shoulder… and keep reading! 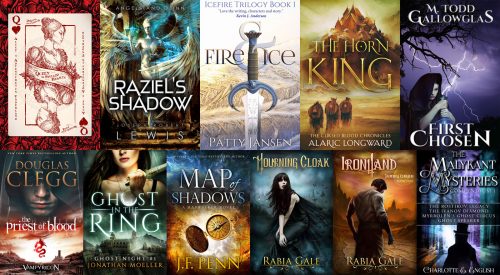 I’m participating in a dark fantasy StoryBundle this month. For a limited time, you can pay $5 and get four novels; for $15 get a bonus seven books, including both Mourning Cloak and Ironhand!

Check out the blurbs and reviews for the individual books here.

Trey would rather fight demons and exorcise haunts than attend a ball. Arabella is a debutante whose plans for an enjoyable Season are about to be permanently cut short when she’s separated from her body. Brought together by a chance encounter, the two race against time to return Arabella to her body—before the otherworldly Shadow Realms claim her.

GHOSTLIGHT, Book 1 of The Reflected City series, is a gaslamp fantasy in a Regency-esque setting. Now available at:

Try before you buy! Chapters One and Two are available to read on this site. 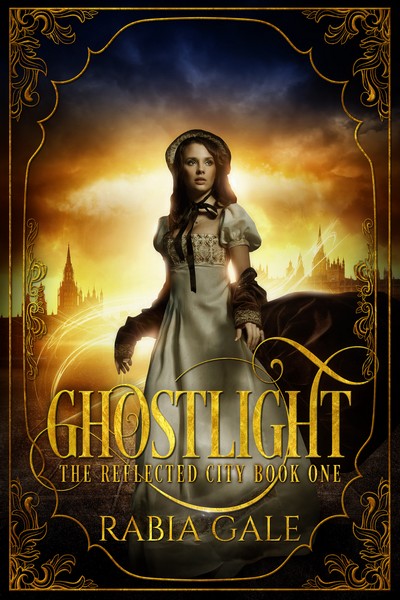 A bunch of magical misfits. Their place to belong. Out of work and trapped in a dead-end coastal town. This is not what Amber had in mind when she left her island home to explore a continent drenched in magic and once inhabited by dragons. She’s this close to working at Stunning Spells, a magical sweatshop that churns END_OF_DOCUMENT_TOKEN_TO_BE_REPLACED