I’m super-excited to announce a giveaway of Daisy Yellow Zine (Issue 8). This digital art journaling zine is full of inspiration, including blogging ideas for creatives and journal prompts. My article, Embrace Imperfection, also appears in it. 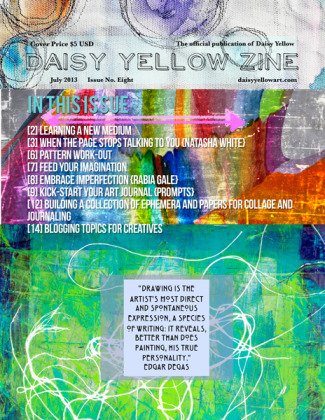 Tammy, the awesomely creative person behind the zine and the site, has graciously offered to give away TWO copies of Issue 8 (available only in digital format). Please leave a comment if you’d like to enter. Giveaway is open until Monday, July 29th, 10pm EST.

If this is your first introduction to Tammy and Daisy Yellow, check out some of my favorite parts on her site, such as the Index-Card-A-Day Challenge she runs every summer. If you’re stuck for ideas, check out Tammy’s post on What Can You Do With an Index Card? She also introduced me to the delights of drawing mandalas and the fun of practicing fonts.

If you art journal–or have ever thought of doing so–Daisy Yellow is a great place to go for ideas, tips, and inspiration.

Today I drew a tap shoe and an owl statue.

My creative (non-work-writing) goal for February is to draw every day–though at the rate I’m going, it’s more like Draw Every Other Day.

I didn’t draw much as a kid. Actually, I hated art class. I didn’t have an abundance of natural artistic talent. The disconnect between the picture in my head and the one on my page frustrated me. My Bs and Cs in art dragged down an otherwise stellar report card–which made me rather cross.

And I was slow. My art pad was filled with incomplete projects since I always ran out of time. (I’m that way with all hands-on work, including labs. I was always the last one out of lab, one of the reasons I didn’t minor in chemistry. I never finished my wooden-spoon doll with the paper mache head nor my embroidery sampler in Handwork during elementary school. And yes, it still galls after all these years!)

I would’ve rather done extra math than painted a still life.

But, secretly, I always wished I could draw well.

There were two things I didn’t understand about art when I was a kid. I don’t know if it’s because no one ever told me, or that I didn’t listen (I was stubborn, too, as well as being a loather-of-art-class).

First, you can learn art. What I thought of as talent is mainly skill. A teachable skill. No one ever taught me things like how to use my art materials, how to create depth, or the proportions of the human face. I didn’t realize that one could take art skills and break them down into smaller steps, and that an ordinary person like me could learn them.

Second, because I had it in my mind that being good at art was an innate talent–either you had it or you didn’t–I never bothered to practice it. One art class a week was not enough to make up for my lack of giftedness. If I wanted to draw well–and yes, I wanted to, still do–I should’ve been practicing.

Twenty years later, with a writing career and homeschooled kids, I’m finally squeezing it in. It’s not much, it’s not going to be consistent, but it’s still keeping the dream alive.

How about you? Do you have something that you secretly wish you could do well? Something that’s always appealed to you, but that you’ve never tried?

Look what I discovered in my box of odds and ends the other day: 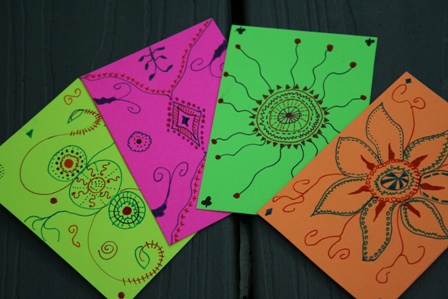 Oh, fun, I thought. Doodles on neon-colored index cards. I love index cards, and I love doodles. But then I flipped the cards over and found: 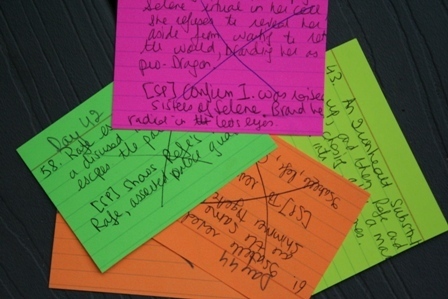 Folks who’ve taken Holly Lisle‘s How to Revise Your Novel course will recognize these as the color-coded scene cards from Lesson 10. Apparently, after I was done with the revision, I recycled them into ATCs. I love that the leftovers and discards from one creative project turned out to be the raw material for another.

Btw, there’s a lot more you can do with index cards besides turning them into artist trading cards. Check out my post, 9 Ways to Use Index Cards, for more ideas. Also, Tammy over at Daisy Yellow hosts ICAD (Index-Card-A-Day) to get those creative juices flowing.

Miss M. made these suncatchers by using an eye dropper to put liquid watercolor on paper towels. She got to work on her fine motor skills and make something pretty. (Just don’t look too closely at my desperately-need-to-be-washed windows!). 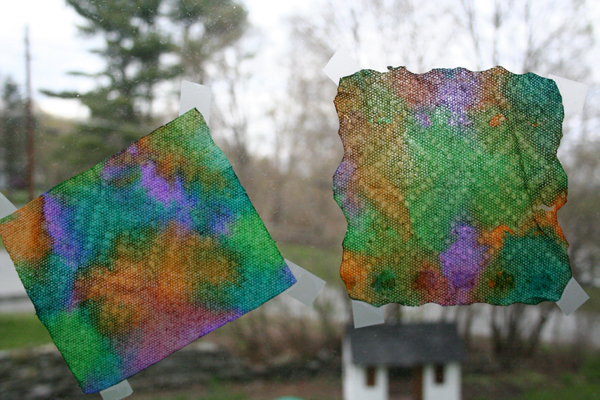 Sir I. had fun using Legos, corks, forks and miscellany from the kitchen junk drawer to create this lightbulb-manufacturing machine. Can you see the lightbulbs? 😀 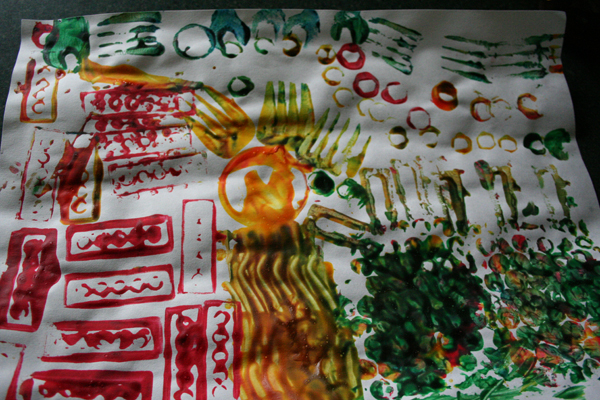 I don’t doodle in color much (I doodle to keep my hands busy while my mind is wandering elsewhere and sticking to black helps keep it that way), but I got some colored gel pens and tried them out. 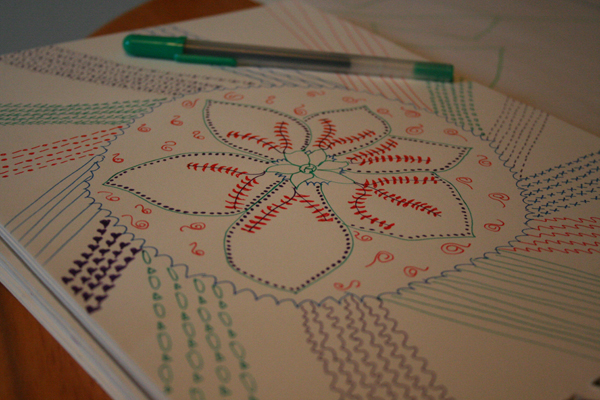 Gruesome rites. Whispers of witches. Arabella’s past has caught up to her. Arabella finally feels like she belongs. She’s settled into her role as the Bearer of St. Brigit’s Arcana. She has family, friends, and a purpose. And assisting the Phantasm Bureau has brought her close to handsome viscount Trey Shield, a formidable magician in END_OF_DOCUMENT_TOKEN_TO_BE_REPLACED