One of my favorite pieces of art 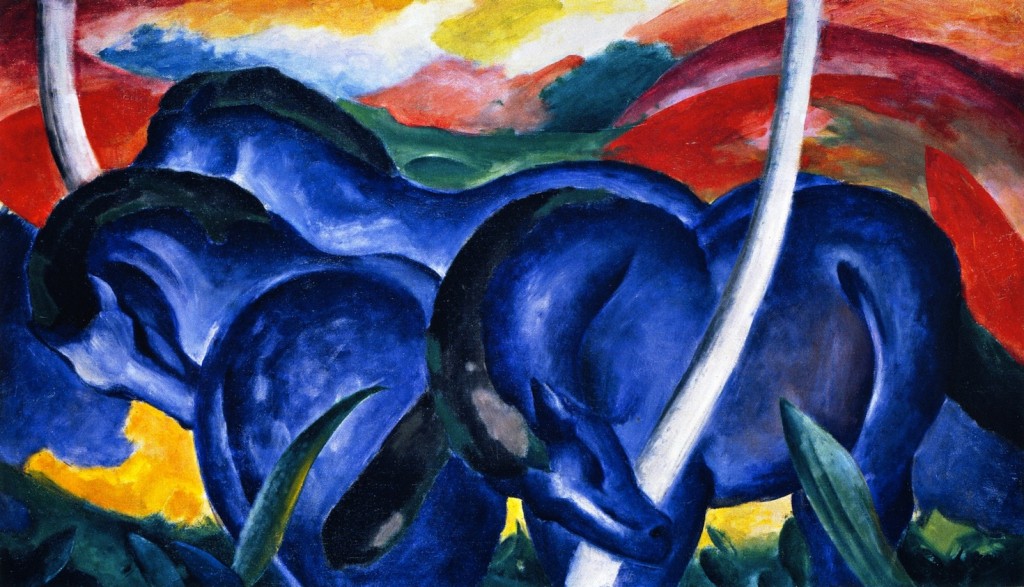 Edited with links to other bloggers posting one of their favorite pieces of art:

Last week, I talked about what I’ve learned from my favorite how-to freelance book, The Freelancer’s Survival Guide by Kristine Kathryn Rusch. The week prior to that, I shared 4 things I’m doing as a working writer.

Now that I have a writing-as-business theme going, I’m going to continue it.

Back when I first self-published Shattered, I had little clue about how to go about running my brand-new business. Luckily, I stumbled on to another of my favorite art business resources, this time by author and artist M. C. A. Hogarth. She uses three cartoon jaguars to illustrate business principles, first in her columns and most recently in a webcomic. What I love about Hogarth’s approach is that she puts both the right and left sides of the brain to work for the professional artist.

Hogarth separates the roles of a working artist into three: Artist, Marketer, and Business Manager (hence, the three jaguars). This trichotomy (oh look, it’s actually a real word) makes it easier to put needed walls between the various roles–and also the doors that act as communication channels between them.

Hogarth has a ton of great insights, but my single biggest takeaway from her columns (we’re talking about fireworks going off in my head, people) is this one.

Every artist should internalize this principle–preferably before you bring your work into the marketplace (or else the economic realities might well crush your very soul).

Every piece of art–a one-of-kind costume, a story, a musical composition–has inherent value. Its value is in what it means to the artist and/or the emotional response it evokes in someone who experiences it. This is not a value you can put a dollar price on.

However, what you put on the marketplace is not art, but a product. A short story that sells to an anthology is a product. A song available as a digital download is a product. The handmade doll on the vendor’s table at the Renfest is a product. And products are subject to economic realities like demand and supply to determine their prices.

Making that distinction is helpful because it separates artistic merit (or value) from monetary compensation. It keeps the Artist part of you from sinking into a funk because you put the novel that took you a year to write on sale for 99 cents. It keeps you from tying your artistic identity too closely to sales and money.

It also helps to realize, as Hogarth explains in a different column, that a single piece of art can be the basis of many products.

Before reading the three jaguars columns, I had the attitude that once I sold a story, it was gone. First rights had been all used up, and there was nothing else I could do with it.  If I was very very lucky, and the stars were aligned just so, an editor might contact me for reprint rights, but I wasn’t holding my breath.

Hogarth’s examples showed me how limited my thinking was.

Today, thanks in large part to a changing industry, I can create many different products from that one short story I sold to the anthology. I could bundle it with other short stories and sell it on Amazon. I could license its audio rights to a podzine. I could have it translated into different languages. I could sell it to a magazine that accepts reprints.

Each time that one story is re-released in a different format or venue. One story becomes many products.

I’m currently serializing Quartz, a science fantasy set in a sunless world, using the same model Hogarth uses for her serials. Quartz updates weekly on Tuesdays, but a $5 donation gets you an extra episode on Saturday. Once the serial is run, I’m going to have it formatted into an e-book and put it up on Amazon, Smashwords, Kobo and all. Someday, I might even hire a narrator to do an audio version. One story becomes three products–each reaching a different market.

This concept also takes the pressure off me as an artist. I’m working on increasing my productivity (mainly by plugging my biggest leak, the Internet), but I can also enlist my Marketer’s help in finding new places for my existing work. Artist’s output may vary from month to month, but it’s the Marketer’s job to impose regularity in the production schedule.

All of Hogarth’s columns are well worth the read. Also be sure to catch the webcomic’s current storyline about why any artist being paid for her work needs to pay attention to the business side of things. It could save you a world of trouble.

Many of you have seen the Next Big Thing meme going around, in which we writers hold forth on our latest books (either works-in-progress or newly-released). Thanks to Jo Anderton, who tagged me, you can find out more about (one of) my newest project(s)!

1. What is the working title of your next book?

The working—and final—title of my novella is Mourning Cloak.

2. Where did the idea come from for the book?

I was on a family hike over Memorial Day weekend in 2011 when I saw dozens of gorgeous dark butterflies, with blue spots and cream edging along the wings. Being the kind of nerd I am, I pulled out my Audubon field guide to New England and identified the butterflies as mourning cloaks. My muse instantly pounced on the name and insisted that mourning cloaks would make great fantasy characters (and it was right!).

3. What genre does your book fall under?

Since there’s both magic and nanotechnology–but no steam-powered anything–I guess I’ll have to call it science fantasy.

4. What actors would you choose to play the part of your characters in a movie rendition?

I have no clue. Isn’t that the director’s job, anyway?

Actually, I think this world and story would work better as a video game than a movie. It has strange races like mourning cloaks, eerie men, and wind swifts; battle-suits and mecha; prayer magic and blood-formed wards; passion and faith and betrayal and clashing armies. Definitely video game material.

5. What is the one-sentence synopsis of your book?

A failed hero deserted by his God and living in exile encounters a wounded demon who offers him a chance to regain what he lost.

6. Will your book be self-published or represented by an agency?

7. How long did it take you to write the first draft of the manuscript?

Um, I have no idea. I did it in bits and pieces over the course of a really busy year in which my husband got a new job, we sold our house in Vermont and moved to Virginia.

8. What other books would you compare this story to within your genre?

I beta-read Suited by Jo Anderton around the same time I wrote the first draft of Mourning Cloak, so I know similarities abound. (Battle suits, anyone?)

But really, I think this story is more like role playing games of the Final Fantasy bent than any novel I can think of at the top of my head. Amnesiac characters? Check. Strange races? Check. Fantastical magic swords alongside science-fictional bots? Check. Transformation? Check check check!

9. Who or what inspired you to write this book?

You mean besides the butterflies? *wry smile*

I wanted very much to write a story about faith. My failed hero has lost his. My altered assassin clings to hers. What they have faith in. How the faith helps–or doesn’t help–in the face of adversity.

I also wanted to write about older characters weighed down by their past. As I grow older, I’m less interested in the blank-slate, youthful protagonists and more intrigued by characters who have been worn by life, who have seen darkness both inside and outside their own souls.

10. What else about the book might pique the reader’s interest?

A man transformed from within to become a battle machine. A woman so altered that she can dissolve into mist and drip through the ground. A cold, mountain city of steel and electricity, warding bells and safe roads. A hot land of deserts and plains, of bronze arcana and prayer magic. Nano-tech and string theory in fantasy trappings.

I tag Liana Mir, Lisa Ahn, and Miquela Faure. And if anyone else would like to play along, just leave a comment below and I’ll add you to this list!

In the past few weeks, I posted about why I think I write science fantasy. When that turned out to be a discussion on how to define the genre, I went on to elaborate how the different languages and vocabularies of fantasy and science fiction are blended in science fantasy.

Today I have a confession: The reason why I write science fantasy has very little to do with a reasoned, thoughtful approach to writing fiction and everything to do with my childhood influences. Behold.

Feline humanoids with super powers flee their dying planet in spaceships and crash-land on another planet. There they encounter new friends  (unicorn-herding sorcerers, warrior maidens, galactic cops, and robotic fruit-harvesting bears), make a powerful new enemy (a five-thousand-year-old living mummy), and build a fortress and a cool tank. Their leader, a hotheaded young warrior with a magic sword, is constantly in and out of trouble.

Exhibit B: Rainbow Brite and the Star Stealer

A magical girl who brings spring to earth travels across the universe to confront an evil space princess who is bent on adding a diamond planet to her collection of jewels. Features talking horses, both real and robotic, robots and spaceships, lizard creatures and magical belts.

I may have been one of the few people who, upon learning of the discovery of this planet, exclaimed, “They found Spectra!”

Exhibit C: Warriors of the Wind

I know, I know this is the horribly-mangled English-language version of Nausicaa of the Valley of the Wind, but I loved it as a kid and I don’t care that it cut out all the heavy-handed environmentalism. I’m grateful to the newer English version of Nausicaa for clearing up some plot points that had always puzzled me, but the dialog of Warriors of the Wind was funnier and I knew most of it by heart.

So. Blurb: In a post-apocalyptic world taken over by a toxic jungle and giant insects, a small peaceful kingdom is brutally attacked by a warlike state (with airplanes, tanks, and guns) when an ancient weapon is uncovered within its borders. Nausicaa, the princess of the Valley of the Wind, who has a strange connection with the giant insects, struggles to bring peace between the nations, and between humanity and the denizens of the jungle. There is also a prophecy.

It’s no wonder that I write genre soup, happily tossing fantasy and science fiction elements into my fiction.

What were your childhood influences? How have they affected your writing or other art?