Hello! This is David, Rabia’s main cheerleader…er, husband. She asked me to put together a guest post, and, well, how could I refuse, right?

Rabia suggested that I discuss webcomics (I’m not sure just what that says about what she thinks I do at work all day…). Which I thought was a pretty good idea. While a lot of webcomics are merely gag-a-day strips, there are a few that strive for something more: they set out to prove that you can tell fun, gripping, emotional stories in graphical form.

Be aware that, since these webcomics have plots, character arcs, and all the other fun goodness you expect from a novel, you really should start from the beginning for each of them. Not doing so would be like starting a novel on page 253…it won’t be as good of a book.

That said, in no particular (ok, alphabetical) order, here are my top five: 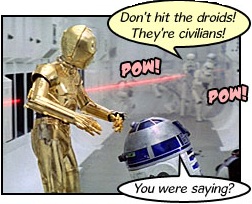 by the Comic Irregulars (start here)
Unlike all of the others that I’m going to talk about, this comic isn’t hand-drawn. Instead, the authors have decided to build a comic using screenshots from the Star Wars movies, but with fresh dialog. The basic setup is that, instead of George Lucas’s movies, we’re actually watching a group of people playing a science-fiction tabletop RPG. A lot of the…odder…things that happen in the movies are surprisingly well explained when you accept that they’re the product of players’ interactions with a game master. 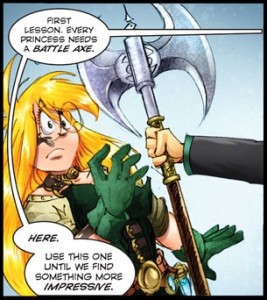 by Phil and Kaja Foglio (start here)
A steampunk comic set in Victorian-era Europe, Girl Genius follows the adventures of Agatha Heterodyne. Most of the (important) characters are “sparks” (think “mad scientist”, and you’re pretty much right). The artwork is amazing, and I’ve found it to be a delicious balance of adventure and humor. Oh, and the emperor of all cats is a main character. What’s not to love? 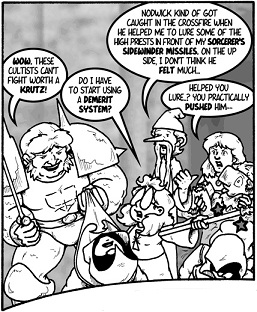 by Aaron Williams (start here and here)
Ok, I may be bending the rules here by grouping two comics into one entry, but they’re by the same artist…and it’s my post…so I’m going to do it. Originally published in Dungeon, a magazine put out by the makers of Dungeons and Dragons, Nodwick follows the adventures of what could be a typical D&D group–a dull-witted warrior and a wizard, neither of whom have qualms about taking slightly less-than-moral shortcuts in pursuit of treasure, a cleric who’s generally oblivious to the antics of the first two…and Nodwick, the group’s henchman. This is not really an adventure story, as humor is often the driving force–one series had the characters singing variations on the Phantom of the Opera songs–but there is a plot line stringing it all together.

PS238 is very different. In a world where superheroes and super-villains are common, what happens to the children? Where can they go to learn about their powers, and grow up into the next generation of super heroes (and villains)? Why, Public School 238, of course! Although still humorous, PS238 is more plot- and character- driven than Nodwick. 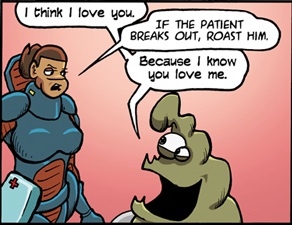 by Howard Taylor (start here)
I believe that this comic has the record for the longest unbroken publication. Since the very first comic in mid 2000, Howard has posted a new strip every single day. No guest strips, no “I’m sick so here’s a stick figure”, no excuses. And he still has time to hang out with Brandon Sanderson, Dan Wells, and Mary Robinette Kowal to make the Writing Excuses podcast that Rabia listens to. I’m in awe.

Oh, yeah, the comic. I’m supposed to talk about that. Er…it’s a sci-fi setting about a band of interstellar mercenaries (Tagon’s Toughs); the titular character, Schlock, is a sergeant on the team. Incidentally, he’s a “carbosilicate amorph”–read, alien with no particular shape. (Ever notice how alien shape-shifters seem to always hang out in humanoid form? Why is that? Schlock, as you can see in the picture, doesn’t muck around with that.) Howard’s gotten much better as an artist since he first started, incidentally. What hasn’t changed is his ability to weave humor, drama, pathos, and adventure seamlessly. 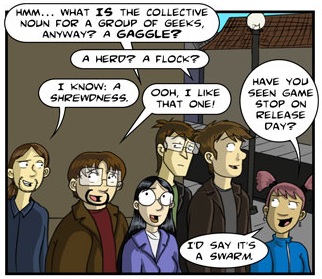 by Alina Pete (start here)
This one is a little hard to describe. Set in a modern setting, the comic follows a group of five friends who regularly get together to play games, including Shadowrun, Vampire: the Masquerade, or Dungeons and Dragons. There’s an over-arching plotline about how geeks can perform amazing feats when “geeking out” about something, and a sinister group of hunters trying to eliminate geeks because of this, but for me the fun really comes from when the gang starts playing. The comic follows the characters into the games, allowing us to see very different sides of all of the characters.

Ok, those are my top five(ish). What are your favorites?

A sinister and shadowy organization. The young mages who oppose it. The hunt for ancient relics has begun. Cloud Village Arc: Lisette never thought she would return to the mountains she fled as a child. But when Tamsin, a Heartwood alumna, invites Amber, Naia, and her on a job in the area, Lisette figures it’s END_OF_DOCUMENT_TOKEN_TO_BE_REPLACED